If you are searching around for Clenbuterol tablets, you are likely to find them being sold in 20mcg

For people who are looking to lose weight or bodybuilders who want to be able to go onto the stage looking as lean as possible, they would prefer to supplement with the 20mcg dosed versions of Clen tablets. This allow them to be a little more flexible with their schedules for dosing the drug during their cycle.

A 40mcg talet tends to restrict people who are trying to lose body fat or it may become a sort of hindrance if for example their cycle calls for them to have to make an increase in their dose of 20mcg, they may have to split the 40mcg Clen tablet in half which could lead to inaccuracies in dosages. Also taking into account that most people who supplement with Clen prefer to increase their dosages by 20mcg every couple of days in order to avoid any of the side effects associated with Clenbuterol.

Bodybuilders and athletes use Clen because of the fact that it helps them to burn fat and the scheduling of doses is actually quite basic and the different cycles do not vary very much in terms of dosages. There is one main difference however between males and females, their peak doses differ. For females, their peak dose is lower compared a male’s peak dose. People who cycle with 40mcg of Clenbuterol tablets usually always use it with something else. For example, people who are using Trenbolone during the offseason may want to supplement Clenbuterol into their cycle to keep their body fat levels to a minimum.

During the off-season, bodybuilders are in a caloric surplus where they are trying to put on lean muscle mass. However when eating an excess of calories, it may be hard for them not to put on some fat as well, this is why some bodybuilders choose to cycle with Clen along with whatever another steroid they are using. Another reason why 40mcg of Clen tablets might be used is because of the fact that anabolic steroids such as Trenbolone can lead to people suffering from breathing difficulties, and Clen is a bronchodilator which would help with the person’s breathing issues.

In order to prevent dosage mistakes, you should be aware that Clenbuterol is measured in micrograms (mcg), not milligrams (mg) which is what many other performance enhancing drugs are measured in. Be sure that you know Clen is measured in mcg so that you do not make any mistakes when administering this drug. This is extremely important because of the fact that Clenbuterol is a stimulant so the outcome of too much Clen as a result of not knowing what it is measure in could prove to be fatal. 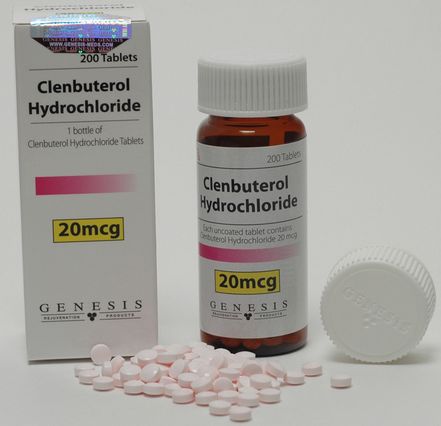 In order for the body to be able to adjust to the effects of Clen, when using 40mcg tablets or liquid Clenbuterol, you have to slowly increase the dosage because of the fact that this drug is a stimulant, therefore, some people may find out that they are intolerable to Clen. By slowly increasing the doses it means that you are able to better assess whether or not you are tolerable to Clen without experiencing any drastic side effects because you would not have jumped straight to a high dose. The tolerance levels for each individual is different, therefore, if you are going to use Clen tablets be sure that you make a judgement based off of your own body and how you feel. Some people may only be able to increase their doses by 20mcg every other day or more but in the end, everyone should be able to reach their peak dosages, which is anywhere between 120 and 160mcg per day. Do not ever start at the peak doses, always start with the minimum dose and slowly work your way up to the highest dose.

Clenbuterol Cycle And Potential Side Effects

Just like the dosages, the cycles of Clen are actually quite simple and easy to get the hang of. Athletes tend to use Clen in situations where they are looking to lose body fat. For a bodybuilder, they would typically use it during their cutting phase when they are in a caloric deficit. The cycle for 40mcg Clen tablets is either four weeks on, four weeks off or two weeks on, two weeks off in order for the effects of Clen to be most optimal. Also take note that Clenbuterol should not be used for more than two – three months at a time.

Just know that these potential side effects as a result of Clen can actually be avoided as long as you are responsible and know exactly what you are doing, as long as these things are evident, you should be safe.