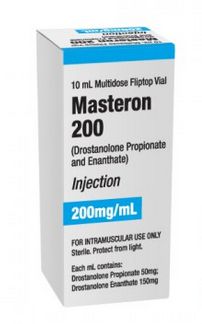 Masteron Propionate is an anabolic androgenic steroid that has the scientific name of Drostanolone Propionate derived from dihydrotestosterone (DHT). The difference is that Masteron has been changed slightly by adding a methyl group which protects the hormone from breakdown by the enzyme 3-hydroxysteroid dehydrogenase found in skeletal muscle. The added benefit of a methyl group is that boosts the anabolism of the hormone which promotes growth in the muscles. The Propionate ester is then attached which controls the release time and creates the most well-known form of Masteron. However, Drostanolone Enanthate can still be found in various underground markets.

The name Masteron derives from the 1970’s where a company called Syntex manufactured the steroid under that name and brought it to the market. Though, they also delivered the compound under other names likes Masteril, Drolban, and Metormon but Masteron stuck through the ages. They also developed Oxymetholone, which is more commonly known as Anadrol, at the same time in 1959.

Originally the drug was created for use with breast cancer patients in postmenopausal women. It worked to calm the patient and provide comfort though they were in an inoperable stage. Soon enough bodybuilders started using it for effects when cutting which is where it has remained.

Unfortunately, the original Masteron brand is no longer available and most other brands developing the drug have discontinued their line though it is still approved in the U.S. by the FDA. The drug has stopped being used in breast cancer patients as other drugs are more advantageous but it remains popular among bodybuilders and is almost considered essential in the professional ranks.

Anyone who is stating that they are selling an original Syntex Masteron will most likely be lying. No U.S. pharmaceutical company manufactures any form of Drostanolone making the drug extremely hard to find on safe markets. Of course, black market versions are available but they are unreliable and extremely dangerous. Alpha Pharma makes the Mastabolin brand which is normally readily available. One benefit is that Masteron tends to now be much cheaper than it was when it was first circulating.

Purchase of Masteron online will be the cheapest way to do so. There are a lot of supplies but it’s finding the right one that matters. Many counterfeit and fake products exist with a lot of people just trying to make easy cash without the proper product. Researching the supplier beforehand is a must as just because it says it’s the real deal often does not mean that it is. More fakes exist than actual suppliers since Syntex Masteron was taken off the market.

It’s also important to note the legality of purchasing Masteron online. Anabolic androgenic steroids are classed as Schedule III controlled substances in the United States which make purchasing them online or face-to-face illegal and can often come with severe consequences. Legal anabolics are heavily advised as they are quality assured and do not come with any illegal qualities or risks. 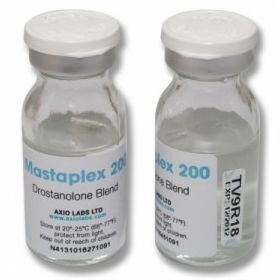 The reason that bodybuilders are such large users of the drug is due to it’s anabolic and anti-estrogenic nature. The latter of these benefits is the reason for its use in breast cancer patients with studies showing that using both Masteron and Tamoxifen Citrate (Nolvadex) can be better than undergoing chemotherapy for patients with inoperable breast cancer.

DHT, from what Masteron derives, is five times more androgenic (androgens are male hormones) than testosterone and is much more likely to bind to the androgen receptors. Due to this, DHT makes muscles look hard and dense as well as promoting fat loss through boosting the metabolic rate or directly causing lipolysis (the breakdown of lipids/fat).

However, Masteron is not great for boosting muscle mass or making gains and is more commonly used for the preservation and aesthetic appearance of muscle when cutting. It can improve strength slightly but won’t promote mass as much as other steroids. The steroid will produce similar results to Primobolan Depot which is not an effective mass gainer. Many other steroids on the market will do a far better job. Drostanolone Propionate can be used in a bulking plan due to its anti-estrogenic effects, however. It will also help minimise fat gain on a bulking cycle but body fat can normally be kept under control without it.

Masteron Propionate is best taken when the user is already extremely lean which is why it’s most often used at the end of a bodybuilding cycles just prior to competition. It helps the user drop that last bit of fat which is often the hardest to get rid of whilst aiding in that dense appearance. Those who use it who aren’t near to competition lean among professional ranks will most likely not receive any noticeable differences. Anywhere below 10% body fat and the individual should see results a lot faster than normal.

As the steroid can produce boosts in strength then athletes such as powerlifters often using it during cutting cycles. Dropping calories usually result in less energy and, therefore, being able to lift less weight in the gym. Yet, by using Masteron Propionate then athletes can avoid this. Athletes can then cut weight to get into a certain weight class whilst keeping the same weight across all of their lifts. It can also boost recovery time slightly, another area that gets affected with a drop in calories. 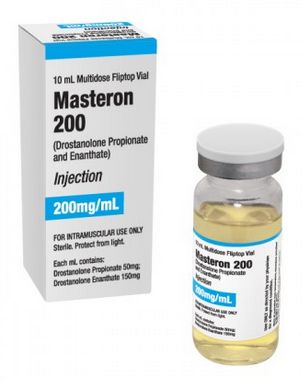 Drostanolone Propionate is mainly known to have very little side effects and those that are presented tend to be tolerated by men.

Drostanolone Propionate has been noted to have an impact on cholesterol by increasing LDL levels in the blood whilst reducing HDL levels to a greater degree. Oral steroids tend to affect cholesterol levels more but they will be more pronounced than Nandrolone compounds or the testosterone hormone.

As the cholesterol effects are so significant then cholesterol management is heavily advised more so than similar drugs. For instance, if you already suffer from high cholesterol then you should not use Masteron Propionate. For the general public, you need to simply maintain a healthy diet rich in omega 3 fatty acids and low in cholesterol-raising foods such as saturated fat, salt, and sugar. Exercise is normally already done by the user but an emphasis should be placed upon cardiovascular work like swimming, running, and cycling.

Slight negative effects on blood pressure have been noted but most people will not experience any difference.

As Masteron is not a hepatotoxic anabolic androgenic steroid then there should be no stress or damage placed upon the liver.

Normal side effects of androgenic are acne, accelerated hair loss, and body hair growth though as the steroid only has mild levels of androgenic activity then these are not normally a concern. It is unfortunately well known for its effects on male pattern baldness. If the user is predisposed to this condition then they can expect much more rapid hair loss.

Drostanolone is not a hormone that is metabolised by the 5-alpha reductase enzyme i.e. the enzyme that reduces testosterone into dihydrotestosterone. As Masteron is already a DHT then there is no reduction process which means there is nothing to inhibit. Therefore. the steroid will not be affected by a 5-alpha reductase inhibitor such as Finasteride.

As Masteron Propionate does not aromatise then any progestin nature making effects are non-existent such as gynecomastia, water retention, and increased blood pressure.

For females, the androgenic effects mean that virilization can be an issue. Virilization is the condition where females develop masculine traits. Women can experience things such as male-pattern baldness as well as acne on their chest, back, face, hairline, underarms, and groin. Hair will also most likely start growing on the face (cheeks, upper lip, and chin), their voice will deepen, their sex drive will increase, their breasts can underdevelop, their clitoris can enlarge, and their menstrual cycles can become irregular. Low doses normally mean that the effects are negated but individual response determines a lot. If symptoms start to become present then stop taking Masteron and they should leave. If the drug is prolonged whilst symptoms are ongoing then they can become permanent.

Natural testosterone levels should begin after the individual stops using Masteron after several months. Users who expect them to return immediately will be sorely mistaken. Post Cycle Therapy (PCT) is recommended which should positively impact recovery times but will not return testosterone levels back to their natural peak. A proper PCT plan should make sure that testosterone levels are healthy to maintain proper bodily function but won’t boost them into the sky.

If a previous issue with testosterone or damage to the Hypothalamic-Pituitary-Testicular-Axis (HPTA) exists then PCT and the degree at which testosterone levels return will be greatly affected.

300-400mg per week is the typical range for the dose among healthy adult men. This normally equates to injecting 100mg every other day for a complete cycle of 6-8 weeks. Though some users often choose to split the dose into daily injections but that hasn’t been shown to be any more advantageous.

If using Drostanolone Enanthate then 1-2 injections per week will suffice but as previously mentioned it’s incredibly hard and dangerous to find.

Most view Drostanolone Propionate as a weak anabolic steroid compared to others on the market as it does not promote mass or muscular size as effectively. Also, as pointed out earlier, it is not advised unless you are very lean. In a lot of circles, this is not known which means that frequently users are disappointed by the lack of effects. Drostanolone Propionate is actually quite a valuable steroid when used properly. Not all steroids are for direct increases in mass which are contrary to popular opinion. Some, like Drostanolone Propionate, are for keeping the user lean and sleek whilst improving the aesthetic appearance of the muscles opposed to the size.