Home
\
Workouts
\
9 Things You Should Never Do On Shoulder Day 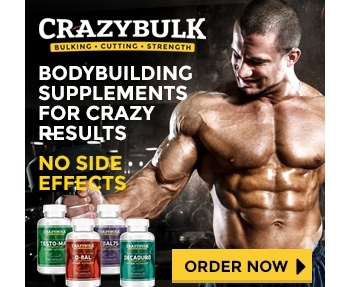 Want to build big, round, shoulders without the risk of injuring yourself? Then take a look at some of the following points to ensure maximum growth and minimum damage.

It is quite a normal thing to see people performing shoulder exercises with bad form but this is especially harmful when it comes to training shoulders as you can easily injure your rotator cuff.

This is why I’ve decided to produce a list of many of the incorrect and dangerous things that people tend to do on shoulder day and I will also give you ways on how to go about fixing certain things about the way you train this body part.

The majority of people like to start off their shoulder workouts with the overhead press, making the assumption that it works multiple different heads of the deltoid equally. Well this is not 100% true.

Your elbow position also plays a role in this. Whenever you do a barbell press from the front, your elbows are more forwards rather than being towards your sides meaning that most of the stress is being put onto the front deltoid. So those are just some of the things to consider whilst doing shoulder presses as they are great, mass-building exercises and you can get them to focus on one particular deltoid head more than the others.

However, if you wanted to make your middle deltoids the primary worker, presses aren’t going to cut it for you as this part of the shoulder is the one that gets the least amount of stimulation from pressing movements. 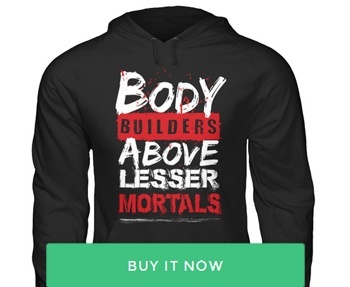 Ego lifting weights that are going above your head is a very dangerous thing to do. If you’re go so heavy to the point that your shoulders can’t actually handle the weight, your body will try to find ways of making it easier for you to handle the weight, this often leads to a huge curve in the lower back for more leverage.

You’ll notice that the shoulder press exercise you were trying to do is now becoming more of a chest exercise as your body puts itself into an inclined position, rather than being straight. This recruits more chest fibres and you increase the risk of hurting your lower back.

When pushing weights above your head, your spine needs to remain in a neutral position (there can be a very slight arc) and your core needs to be tight throughout the entire movement. If you are doing heavy shoulder presses with an exaggerated curve in your spine combined with little-to-no core tightness, your chances of a herniated disc are amplified.

A good way to know how neutral your spine is when doing seated presses is to ensure that your back remain presses against the bench at all times, with the standing overhead presses, you need to have more of a curve in your back but make sure not to over exaggerate it.

Loading the bar with lots of heavy weight is great for overloading the shoulder, however, this is not something that you want to be doing when pressing a bar behind your neck. This is because of the fact that in the behind-the-neck position, your deltoids are at their weakest spot, therefore, using crazy amounts of weight for this exercises is likely going to result in some sort of injury that may take a long time to recover from.

If you are looking to overload the deltoids with heavy weight, do it with movements that are in front of you, stick to using moderate or lighter weights when performing behind-the-neck presses as they can be an effective exercise if done correctly.

4. Don’t Use A Close Grip On Upright Rows

Upright rows are a pretty great exercise for the middle deltoids but if you want to be able to use them to their maximum potential, hold the bar with a moderate grip. Often times in the gym you’ll see people holding the bar with their hands practically touching each other which puts you in a bit of an awkward position.

Your elbows are forced forwards and to your sides with a close grip which puts less stress on the middle deltoid. It is also not a very healthy position for the shoulders joints to be in so ensure that your grip is a little wider and keep your elbows out to the sides when lifting the bar to maintain as much tension as possible on the side deltoid.

5. Don’t Limit Your Range Of Motion 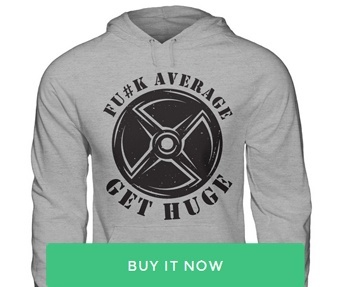 When it comes to some of the isolation exercises such at front and side lateral raises, many people find themselves cutting their range of motion short by stopping the weights from going past a certain height. Often times, this means that the deltoids haven’t reached the position of a peak contraction. Some trainers have said that bringing the weight a little above shoulder height could be beneficial.

The bigger the range of motion, the harder the exercise. So you may be working with a slightly lower rep range with a weight that you’re used to doing with ease or you may even have to drop the weight to get that extra range of motion which promotes even greater time under tension for more muscle growth.

6. Don’t Open And Close Your Elbows On Single-joint Exercises

When doing isolation exercises like side lateral or front raises, it’s crucial that you keep a slight bend in your elbows. However, what many people seem to do is change their elbow position throughout the movement; you need to keep them locked in the place for every single rep that you complete.

The elbow joint opening and closing recruits some bicep and even tricep into the exercise which is the opposite of what you want to be doing on an isolation exercise. For the most part, this happens when people are using too much weight than what their deltoids can handle and as a result, you end up using other muscles to help you move the weight.

It’s also important to note that when we say keep your arms locked in place, this does not mean keeping your elbows locked out; you need to have a slight bend in them otherwise a lot of the stress of the weights will be put onto your elbow joint which isn’t going to do you any favours. 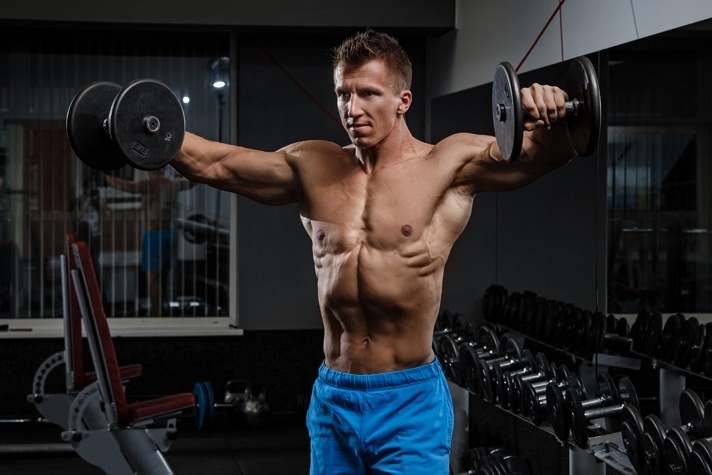 7. Don’t Leave Rear Deltoids For Last In Your Workout

As many of you are probably already aware, the deltoid is made up of three heads, the front, side/middle and the rear and it’s common to see people training their deltoids in this specific order.

By the end of your workout, your energy levels aren’t as high as they were at the beginning, meaning that each time you train shoulders, your rear deltoids are not being hit with as much enthusiasm as your front and side deltoids. You’re less likely to want to put in as much effort at the end as you were at the beginning, this could quite easily lead to your rear deltoids lagging.

This could potentially introduce rotator cuff problems as two heads of the shoulder are remarkably stronger and bigger than the other one which causes an imbalance. An easy way to tell if this is the case for you is to pay attention to whether or not your shoulders tend to slouch forwards more. A good way to fix this is to implement rear deltoid exercises towards the beginning of your workout as you would be able to put a lot more energy into them.

However, this may not be an issue for you as your shoulders may be developed pretty well as a whole, in which case, change up the order of exercises each workout to keep things fresh.

Rotator cuff exercises should be a staple at the beginning of all your shoulder workouts, even at the beginning of your chest sessions as the front deltoid comes into play there too. For many people however, rotator cuff exercises are neglected as they don’t help you to put on any muscle but they are so important in helping you to maintain healthy shoulder joints. Rotator cuff issues can be nasty and can leave you out of the game for a long time so don’t ignore them.

Practice external and internal rotation movements and you won’t be put in the positon of not being able to train your shoulders for a period of time, it may not be fun in any way but I urge you to make it a part of your routine.

When training chest, the front deltoid gets activate during a lot of the pressing movements, you can’t prevent this but what you can do is minimise it by improving your mind-muscle connection with your chest, but that’s a whole different topic.

As a result of the front deltoid being involved when training chest, you may want to consider how your training split looks. If you go with the push, pull, legs routine, then you should be fine as you would be hitting chest and shoulders on the same day (as well as triceps) but if you’re training shoulders the day after chest, you’re likely going to be weaker as they’ve been used the day before. Or even the other way round, you want to avoid training shoulders the day before chest as your chest pressing movements would suffer.

Allow yourself at least two days in between training shoulders and chest and you will be alright as you would have allowed enough time for recovery.

Thanks for reading and see you next time!