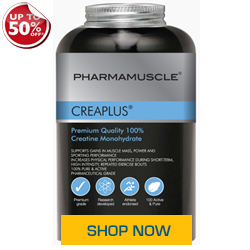 Walking into a supplement store and selecting a product can be a daunting task especially for people who lack the necessary knowledge, and more often than not they end up making the wrong choice.

It is the aim of this article to inform you about a very-high quality product, PharmaMuscle CREAPLUS creatine monohydrate, which I have used and have had a lot of success with. I have been training for close to 7 years now and have tried many different supplements during this time, however only a few have stuck with me as being truly effective.

Creatine, like protein powders, is a very popular supplement so chances are you will end up taking it at one point or another. Because of this reason, you would do well to read this review and absorbs as much information as possible from it.

PharmaMuscle is a very well-known company that makes some of the highest quality products I have ever seen, so it goes without saying that their creatine product is no exception. PharmaMuscle CREAPLUS is made purely out of creatine monohydrate; now there are other types of creatine out there such as creatine citrate and creatine phosphate, but these have never actually been shown to be more effective than regular monohydrate. Because of this, why would you risk buying a more expensive form of creatine when you can buy regular monohydrate, which by the way has had several studies done on it that prove its efficacy?

PharmaMuscle also make sure that the creatine in their products comes from only the highest quality of sources to give you the best possible product; you won’t find any of that low-quality Chinese creatine here that is loaded with unwanted things such as sodium, creatinine, dicyandiamide, and dihydrotriazine.

Another thing I really love about PharmaMuscle CREAPLUS is its great mixability. If you’ve ever tried a creatine supplement before you may have experienced some problems when mixing it with your chosen liquid, but you won’t experience any of that here for sure. This product was micronised in order to create the ultra-small particles found inside, which in return mix very easily. While other products often have a gritty taste or contain powder that settles at the bottom of your cup, this one dissolves almost instantly. Speaking of mixing it up, you should know that this product comes in the best form that creatine can come in: powder. While other forms do exist such as chewable creatine or liquid creatine, these are just a novelty that cost more for no reason at all, so avoid them whenever possible.

Last but not least, this product is also tasteless. Now you may thing this is a bad thing, but the vast majority of people mix their creatine in with their protein shake and as such, having two distinct flavors could result in an unwanted experience. If you want to take your creatine solo and want it to taste good, you could always add your own flavorings!

Knowing how to effectively use creatine is an important step to reaping its many benefits, and that is what I will talk about next. While some people claim that loading is not important, I am a firm believer that it is. The way creatine works is that it settles in the muscles, saturating them; this is where it truly starts to show its benefits. Now saturating your muscles can take a very long time using a maintenance dose especially for people on the heavy side, which is where loading comes in. Loading is when you take a higher dose (say 20g) daily for about 5 to 7 days, followed by a maintenance dose of 5g for a longer period of time.

When taking creatine it is important that you mix it in with either a protein shake or with a sugar-rich drink. This causes insulin to be released which in turn acts as a pump, pushing the creatine inside your muscles. For every 5g of creatine you should take either 100g of your chosen sugary substance or 50g of protein/carbs, if you are going with a protein shake.
Now this product is not the cheapest on the market, but the extra dollar you shell out will allow you to obtain some of the highest quality creatine money can buy. Each serving gives you 5g of 100% pure creatine monohydrate; nothing is added or taken away. Finally, you should also know that this product is vegetarian-friendly.

That’s all for this article guys. Creatine is a very effective supplement and I recommend you give it a go especially if you’ve never tried it before, and while you can take any product you wish, I suggest PharmaMuscle CREAPLUS 100% Pure Creatine Monohydrate since it has been so effective for me.

If you have any comments or questions you wish to ask, please don’t hesitate to leave a comment below.

Thanks for reading and see you next time.