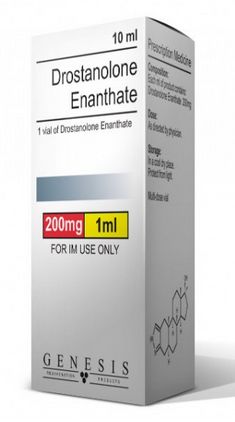 Drostanolone Enanthate or Masteron Enanthate is a steroid first created in 1959 by Syntex and is now only available on the black/underground market. It is a form of anabolic androgenic steroid that is based upon Drostanolone Propionate a.k.a. Masteron which has now been discontinued.

The term anabolic androgenic steroid refers to how the drug causes cells tog row and affects the development of typically masculine characteristics such as hair growth and muscle size. Androgens refer to the male sex hormones such as testosterone whereas anabolism means the construction of cells through the metabolism.

Masteron, what Drostanolone Enanthate is based off, was originally used as part of the treatment for inoperable breast cancer patients in the 1970’s and 80’s. Yet, it eventually dropped off in the late 80s and early 90’s as other therapies became more useful. Though Drostanolone is approved by the FDA as an anabolic steroid, no pharmacy in the U.S. currently manufactures it.

As Masteron rose to fame for its therapeutic effects, bodybuilders started using it for contest preparation. It’s now viewed as almost essential in the pro ranks for its use when cutting for a show.The reason the steroid is so effective is that it’s based upon dihydrotestosterone a.k.a. DHT, a sex steroid and androgen hormone. The hormone Drostanolone is basically just the DHT hormone except the structure has been altered so that the hormone doesn’t go through any metabolic breakdown after injection. This process also increases the anabolic effects of the hormone.

As DHT cannot be aromatized it carries no risk of estrogenic side effects such as gynecomastia, the process in which male breast tissue develops at an abnormal rate. This is more commonly known as ‘man boobs’ or ‘moobs.’ Drostanolone itself is actually known for its effects in decreasing estrogen levels within the body which is also the reason why it had so much success in breast cancer patients. This effect the steroid carries creates a more firm and hard look to the body during cutting cycles.

Drostanalone carries a binding affinity to the androgen receptors which is 500% greater than that of testosterone. This promotes a firmer aesthetic as well as promoting fat loss as it can directly impact lipolysis, the breakdown of fat cells in the body.

Most side effects of Drostanolone Enanthate involve androgens. As androgens increase male traits then acne, hair loss in those with male pattern baldness and increased hair growth on the chest, back, arms and legs can be issues. Though, these effects are not usually very dramatic and are only usually experienced by males who are predisposed to these conditions.

For women, there is a likely hood that they can develop these traits whilst on the drug. Once off the drug, the side effects should disappear but occasionally they can be irreversible. This is a process known as virilization which basically means that male characteristics are promoted within the body such as body hair growth, a deeper voice and an enlargement of the clitoris. Genetic sensitivity plays a large role in whether these side effects will develop. It is recommended that females who want to use Masteron Enanthate choose Drostanolone Propionate instead as it will clear the body faster.

Damage to the liver is not relevant as Drostanolone Enanthate is not toxic and will not cause stress to this organ. Drostanolone Enanthate can have negative effects on cholesterol levels, too. The drug may increase LDL levels in the blood whilst decrease HDL levels. The effect upon these is usually greater for HDL with the impact on LDL not normally being significant. Due to these effects, it’s important to take care of your diet and place an emphasis on cardiovascular activity such as running, cycling, swimming and rowing to counteract them. The user may experience elevated blood pressure, also. If you already suffer from high cholesterol then you’ll want to avoid this steroid altogether. 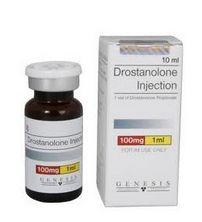 Masteron has to be injected at least three times per week due to the attached Propionate ester with most lifters using an every other day schedule for efficiency. As Masteron was had such awkward injection schedule, underground markets began developing an easier form of the drug with the Enanthate ester attached in the early 2000’s. This new ester affects the active life of the drug as well as it’s release into the body. In fact, Enanthate is not a steroid at all and is simply used to effect the timing of the drug.

Most users dose Masteron Propionate at 300-400mg per week but as Masteron Enanthate is larger then dosing may need to be adjusted by up to 100mg extra per week. The total weekly dose is usually split into two equal sized injections per week with a cycle lasting between 6-12 weeks dependent on the individual and the goal.

Masteron Propionate is the only version of Masteron a female should consider due to its effects on virilization and ability to clear the body. Essentially, an ester is a chemical compound that originates from an organic or inorganic acid, normally carboxylic acid or an alcohol, where one hydroxyl group has been replaced by an alkoxy group.

The best time to use Masteron Enanthate is when the individual is already very lean hence why it is so commonly used in cutting cycles. Usually, bodybuilders use Masteron in the last half of preparation for a competition after they have already dropped a lot of fat. The drug then helps lost the last few pounds which can be tricky to get rid of. Masteron Enanthate can still be a good idea to anyone who is not professional yet. Though, the same effects will not be experienced it can have benefits. If you are not already quite lean then the effects will not be noticeable if any is seen at all.

Another benefit of the steroid is that it can boost strength for the individual. Most users only use the drug for its aesthetic advantages when Masteron Enanthate can keep up strength levels on a diet. As an individual enters a cutting phase and drops their calories, they will also lose a bit of strength. Masteron Enanthate can help prevent this by improving recovery times, muscular endurance and overall power.

It is not advised to use Masteron Enanthate during a bulking cycle simply because other steroids are far more effective. It simply does not stimulate enough growth to be called effective whatsoever. If the dose is increased then there can be slight differences but this is ill-advised as other drugs are available with better effects. It can be used in low doses for its anti-estrogenic effects but if you already have high testosterone levels then this will counteract the estrogenic disadvantages anyway.

Compared to Masteron Propionate, Enanthate is not as good simply because it is harder to control and the ability to find quality Masteron Enanthate is difficult. Most steroid users avoid the drug simply for this reason and it’s not really talked about in the bodybuilding world. This is also because of the fact that people expect all steroids to increase the size of your muscles when there is a range of steroids used for differing effects.

Where To Find Drostanolone Enanthate For Sale

As previously stated, production of Masteron Enanthate has been heavily reduced in recent years and is now restricted only to underground markets. It was already rare in the late 80’s and 90’s but availability has increased since the start of the 21st century. Masteron Enanthate is usually more expensive than Masteron Propionate.

Purchasing Masteron Enanthate online comes with a serious word of caution. There are a wide range of vendors out there which are waiting to scam you which a product that isn’t what you ordered and can be potentially dangerous. It could be another steroid or something completely different and very harmful. However, quality suppliers do exist so make sure to do your homework prior to purchasing anything.

The final word of warning is that Masteron Enanthate is completely illegal in the U.S. making buying the steroid online or face-to-face illegal. It’s classified as a Schedule III controlled substance which means you can only purchase with a subscription. Unfortunately, Masteron is no longer available on prescription making this route non-existent. Online purchase of the drug in any country is almost definitely illegal.